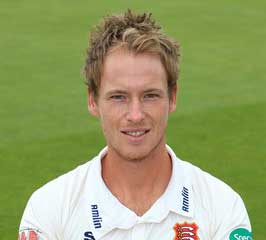 
Thomas Westley (born 13 March 1989 in Cambridge) is an English cricketer. He is a right-handed batsman and a right-arm offbreak bowler who has played first-class cricket for Essex since 2006. He began his cricket career at Weston Colville CC.

On 20 July 2017, Tom Westley was added to England's Test squad, ahead of the third Test against South Africa and debut in third Test played at The Oval from July 27-31, 2017.

England Announced Schedule for Ashes 2023 [+]
England have announced a bumper home schedule for the summer of 2023, which will include a five-match Ashes and a one-off Test match against Ireland.

Salt helps England level T20 series in Pakistan [+]
Phil Salt smashes an unbeaten 88 from 41 balls as England storm to an eight-wicket win over Pakistan in the sixth T20I.

Pakistan beat England in low-scoring encounter [+]
Pakistan take a 3-2 lead in their Twenty20 series against England with a six-run victory in a low-scoring match in Lahore.